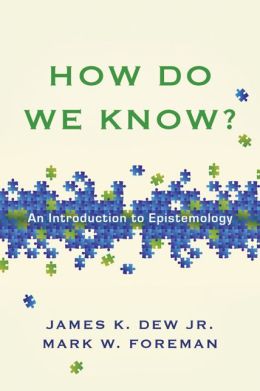 students taking philosophy classes. Since I really enjoyed that book and found it useful, I was excited when I heard Foreman was coming out with another book this time on epistemology. And to be completely honest, I had high expectations for this book as well.

Overview
How Do We Know? An Introduction to Epistemology was written by Mark Foreman and James Dew. Much like A Prelude to Philosophy this book was written for people with little to no background in philosophy. It is written as a resource for those who desire a general introduction that is neither too technical nor too simplistic. As the authors say:

We attempt to survey the major issues in epistemology in a concise and accessible fashion, giving students the basics of what they need to know to go further in philosophy or for pursuing their own unique disciplines. (13)

Although it is a book written for Christians (many of the examples and illustrations are relevant to most Christian’s lives) I like the fact that it is clear about the notion that so many epistemological views aren’t necessarily Christian or Non-Christian. Very little in this book is strictly Christian- except for the chapter on revelation and the section on Reformed Epistemology. Nevertheless it is a broad introduction that is relevant to just about anybody, Christians and Non-Christians alike, who desire to know about epistemology.

This book includes chapters on:
1. The task of epistemology
2. The nature of knowledge
3. Sources of knowledge
4. Truth
5. Inferences and logic
6. Perception
7. Justification
8. Virtue epistemology
9. Revelation
10. Skepticism and certainty

Pros
1. The Chapter on Virtue Epistemology – Virtue epistemology is a relatively new field (unless on were to count Aristotle’s intellectual virtues) so it probably doesn’t get as much attention as it rightfully should in college philosophy classes. Topic deals with virtues like: Studiousness, Humility, Honesty, Courage, Generosity, Prudence. It would be nice to see this field incorporated into more general epistemology classes as well as general college course curriculum. I can imagine how much university life would change if intellectual virtue became a part of core college curriculum.
2. The Chapter on Revelation – Being something of a Barthian I appreciated the fact that they emphasize (and credit Barth) with the notion that Jesus is the clearest revelation of who God is. They quote him when he says that “Revelation in fact does not differ from the Person of Jesus Christ, and again does not differ from the reconciliation that took place in him.” This idea, that Jesus is God’s self-revelation of himself, plays a major role in their argument for divine revelation. Foreman and Dew argue that if Jesus Christ is in fact the son of God – and because of the resurrection we have good reason to believe he is – then we can believe that Jesus is the greatest revelation of God. If Jesus is the greatest revelation of God the we are within our epistemic rights to see the Bible as a source of divine revelation. Dew and Foreman’s argument (which is a lot tighter than I just presented it) is powerful in that it avoids the circularity of most arguments for biblical revelation. This non-circular argument for Scripture as divine revelation is a useful tool for anybody arguing for the authority of scripture.
3. Fair Presentations of Differing Viewpoints – Each chapter gives charitable presentations of opposing views. For instance the chapter on truth gives fair presentations of coherentism, pragmatism, and the correspondence theory. Each position is presented as having strengths and weakness. The authors end up arguing for a particular view, but always do so fairly always presenting the best cases for the opposing views.
4. Discussion Questions – At the end of each chapter the authors present the readers with several discussion questions based off the chapter. This will definitely help the reader internalize the information they just read. It might also be helpful for homework assignments if this book is being used as a textbook.

Cons
I was thoroughly pleased with this book. I thought the book presented the most important topics in epistemology, it didn’t get bogged down in overly technical discussions, it made good use of primary sources, it was clear, and it was very readable – all that to say it’s a great book. My only critique of the book comes in certain positions that Dew and Foreman land on. For instance I disagree with their conclusion on the issue of perception. They end up making a case for critical realism – the view that genuine knowledge of the world is possible yet there is potential for perceptual and cognitive error. I think this is a intellectually humble and intuitive position. Yet it seems to me that indirect realism or representationalism better accounts for how our physiology actually works. In critical realism, or better yet direct realism, perception is thought to give the perceiver direct access to the thing perceived, yet it seems to me that those things do not actually happen when I perceive something. For example, take my perception of my lap top as I am writing this review. As I am writing, light particles bounce off the object (my white laptop) and activate the rods and cones in my eyes. The rods and cones send an electrical signal through my optic nerve which eventually makes its way to my brain. My brain then converts this electrical image into something that looks something like a white laptop. If this overly simplistic story is somewhat accurate, representing how my physiology actually works, then it really seems as though I am not perceiving an actual white laptop. I am perceiving an idea, which my brain has formed, of a white laptop. If you wanted to, you could mess with the electrical signals in my nervous system and make me perceive a blue laptop, even though I am not sitting in front of a blue laptop. This example serves to show that I am actually perceiving is the idea formed in my mind from the senses, not the object itself. In other words I am perceiving a representation of the world – not the world itself. That is just one example of a position presented in this book that I disagree with.

Conclusion
Even though there certainly are some positions in this book that I hold different views on I thoroughly recommend this book. As far as introductions go, this book is top-notch.

How Do We Know makes good use of primary sources, it is clear, and it very readable, and it presents the most important views in an easy to understand manner.

Even though epistemology is topic basic to everyday life, it can be very intimidating without a good guide.  Dew and Foreman are the guides you are looking for. They have written a clear book on one of the muddiest topics in philosophy.

(Note: I received this book courtesy of IVP Academic in exchange for an impartial review.)