Today we celebrate (mourn, think about, reflect upon, take your pick) the 500th anniversary of the Protestant Reformation. With this momentous event upon us, 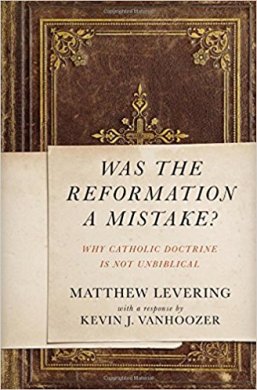 numerous people have turned their attention to the various historical and contemporary implications of the Reformation. You can see this in the number of books, articles, and blogs that have been devoted to treating either the background of the Reformation, Reformers, and Protestant-Catholic relations.

Among those books these stick out to me as being really interesting:

The End of Protestantism – Peter Leithart

But there is another book that recently caught my eye. A book that was written by a Roman Catholic theologian whom a lot of protestants really like: Matthew Levering (Professor at Mundelein Seminary). Levering, just published a book with one of the foremost evangelical publishers, Zondervan. It’s titled Was the Reformation a Mistake? Why Catholic Doctrine is not Unbliblical. If that doesn’t catch your eye then maybe the fact that it includes a Protestant response by Kevin Vanhoozer will!

Enough about the background of the book. What is this Roman Catholic theologian’s answer? Was the Reformation a mistake? According to Levering – Yes and No.

No, because the Reformation has reminded the Church of things that have been neglected by Roman Catholics, namely, love for Scripture, the authority of God’s word, salvation by God’s grace, gospel, preaching, Bible study, and personal faith and relationship with Christ. (16) Levering is grateful for these thigns. However, in another sense, he does in fact believe the Reformation was a mistake. How was it a mistake? Well he says, the Reformation was built on a mistaken assumption that Catholic views of Scripture, Mary, the Eucharist, Justification, etc. are unbliblical. In light of this he attempts to show that Catholic doctrine is in fact not unbliblical (note he doesn’t say biblical, rather he says not unbiblical).

The reasoning prescribed by the Bible for interpreting biblical texts is hierarchically and liturgically contextualized, in the sense that the Spirit communicates the word of Christ to the people of God who are gathered for worship by “the apostles and elders,” and by those like Timothy whom the apostles (whose testimony to the gospel of Christ remains uniquely authoritative) appointed as their successors. (24)

To put it more plainly, when we think about doctrine, we must come to the text of Scripture and read it through the lens of tradition. Tradition tells us what the text means and what the text is about. To read Scripture outside of this “biblically warranted mode of reasoning” is a wrongheaded way of reading the text.

Given his definition of biblically warranted modes of reasoning, he proceeds to treat the scriptural background of numerous Roman catholic doctrines, including Scripture, Mary, the seven sacraments, justification, purgatory, saints and the papacy. The result is essentially him saying “well, scripture doesn’t exactly teach purgagatory or the papacy, etc.; but through the mode of reasoning we apply to the text, the doctrines are not unbiblical.”

If protestants are not convinced by his conclusions, according to Levering himself, that is okay! He isn’t trying to convince them to accept Catholic doctrine. Rather he simply wants to show them that Catholics aren’t unbiblical in their thinking. I will leave it to you, the reader of this blog, to pick up the book and decide whether you are convinced by him.

However, I do want to throw in my two cents…

Not being unbiblical is not enough. We aim to say what scripture explicitly and implicitly teaches, nothing more and nothing less.

Tradition is not a second source of revelation – it is a helpful external guide.

All in all, despite this criticism, I do have to commend Levering for writing this book. At the very least, it will dispel caricatures that some protestants have about Roman Catholics, namely that they simply make stuff up as they go or that they don’t care about the Bible. That, it seems to me, is a worthwhile result.

Note: I received this book from the publisher in exchange for an impartial review.