That’s the Garwood Anderson’s thesis in Paul’s New Perspective. In this long (+400 page) but very readable book Anderson argues against those advocates of The New Perspective on Paul and those of the Traditional Protestant Perspective (sometimes called the Lutheran view) showing that neither camp really gets Paul right. Paul cannot be understood simply from the NPP nor can he be understood simply from the TPP, rather what we see in Paul is development. Paul begins with the concerns brought up by NPP advocates and by the end of his career ends with concerns of the TPP. 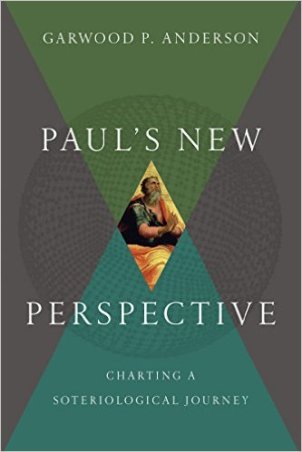 Paul’s developing soteriology is supposedly seen in his development from concentration on “works of the law” to works more generally. Anderson argues that Romans, is a sort of transitional letter marking the shift between Paul’s old perspective and Paul’s new perspective.  In Romans we see the transition between “the largely horizontal crisis of Gentile covenant membership independent of the law to a more vertically oriented reconciliation to God gained by faith apart from works, works of any kind.” (13)

Never disparaging either the NPP or the TPP, Anderson argues that both positions get a lot about Paul right, and that both sides have helped the church understand something important about its relation to God and the world. Some figures, like Wright, get it more right than others. For instance Wright in PFG rightly describes Paul’s logic as going vertical to horizontal, however the emphasis in Wright’s work is horizontal to vertical. Similarly, Dunn has helped reveal the horizontal problems Paul was dealing with when it came to the law’s role in acting as a dividing role between Jews and Gentiles.

Having established the provenance of these letters Anderson turns his attention to two topics Works/Grace and Justification/Salvation in light of his reestablished order of letters. From this new order he shows that with regards to works, his early topic of “works of the law” shifts to “works” (full stop) with Romans acting as a transition between these two positions. Grace also follows this pattern. Beginning with Romans, grace is opposed to and excludes works. Concerning justification/salvation, in his later letters Paul recedes from the language of justification and prefers to use language of salvation and reconciliation. These two sections are made up of indepth exegetical and lexical work.

Assessment
So how convincing is Anderson’s argument that the New Perspective is Paul’s is actually Paul’s old perspective? I guess that comes down to one important factor, how convincing do you think Anderson’s assessment of Paul’s literary itinerary is? Do you find it plausible that Galatians is Paul’s first letter? If you think Galatians & Romans are fairly closely dated that his argument doesn’t really work. Do you buy a Roman (as opposed to Ephesian) provenance of the Prison letters? If you don’t then that throws a wrench in his entire reading of Pauline development as well. The problem with Anderson’s propsal is that you have to hold to a lot of minority positions regarding the composition of these letters. Neither the NPP or the TPP hangs upon one’s acceptance of a particular dating

of Paul’s letters, but Andersons’ thesis certainly does. This doesn’t necessarily mean that Anderson’s explanation is wrong. In fact, I would argue that it has a lot going for it! It breaks down some of the false dichotomies of the NPP/TPP debate, allows the church to incorporate the best of both perspectives, and has a lot of explanatory power. (His thesis even helps explain some of the concerns brought up by Apocalyptic readings of Paul!) But the fact that his whole argument is built upon the foundation of dates makes his foundation rather feeble. If one can decisively show his dating of Paul’s letters are wrong, his argument (in my opinion) falls apart.

All in all I would say that Paul’s New Perspective is a well written and well researched book, offering a via media in a rather creative way. Students of Pauline theology would do well to pick up this book, he does a fine job charging the various debates between NPP & TPP camps. His chapter on Post-NPP authors is fine as well. I can see myself assigning these chapters to students in a Pauline theology book, helping them get acquainted with contemporary debates in the Pauline literature. On top of all this, the summary of his position is rhetorically powerful,  much like EP Sanders’ was: “covenantal nomism,” “getting in vs. staying in,” “solution to plight,” and “in short, this is what Paul finds wrong in Judaism: it is not Christianity.” Anderson’s position is quite memorable as well: “Paul’s New Perspective is Paul’s old perspective.” This catchy statement alone ensures the ideas in this book will be remembered, regardless of their staying power.

While I’m still not sure that Anderson’s proposal is convincing, it certainly is thought provoking. For that reason, I recommend you pick up this book. Its an position that deserves more thought and attention.

(Note: I received this book from IVP in exchange for an impartial review)