Stuff I Have Seen

I love the fact that Logos gives out a free book each month. But sometimes those books are hit or miss. This month though, its definitely a hit. They are giving away an awesome book on Pauline Studies and they are throwing in a game-changing book for dirt cheap . The first book – the free book – is Stephen Westerholm’s short book Justification Reconsidered: Rethinking a Pauline Theme.

Note: You can read my review of Justification Reconsidered by clicking on the link here. 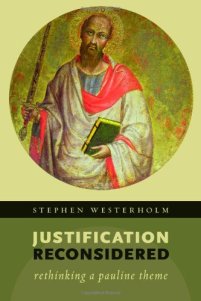 Here’s a short blurb: Much has been written of late about what the Apostle Paul really meant when he spoke of justification by faith, not the works of the law. This short study by Stephen Westerholm carefully examines proposals on the subject by Krister Stendahl, E. P. Sanders, Heikki Räisänen, N. T. Wright, James D. G. Dunn, and Douglas A. Campbell. In doing so, Westerholm notes weaknesses in traditional understandings that have provoked the more recent proposals, but he also points out areas in which the latter fail to do justice to the apostle.

The other book is Douglas Campbell’s game-changing (and largely wrong) The Deliverance of God: An Apocalyptic Rereading of Justification in Paul.

Here’s a short blurb: This book breaks a significant impasse in much Pauline interpretation today, pushing beyond both Lutheran and “New” perspectives on Paul to a noncontractual, “apocalyptic” reading of many of the apostle’s most famous—and most troublesome—texts. In The Deliverance of God, Douglas Campbell holds that the intrusion of an alien, essentially modern, and theologically unhealthy theoretical construct into the interpretation of Paul has produced an individualistic and contractual construct that shares more with modern political traditions than with either orthodox theology or Paul’s first-century world. In order to counter-act that influence, Campbell argues that it needs to be isolated and brought to the foreground before the interpretation of Paul’s texts begins. When that is done, readings free from this intrusive paradigm become possible and surprising new interpretations unfold.

You can pick this must-read, conversation changing, book for just 99 cents when you get the free Westerholm book.

If you don’t have logos – don’t worry! You can download the app for free on your mobile device and still purchase individual titles. So you don’t need to spend hundreds of dollars on Logos to get these two books.