Its actually a plausibility problem… 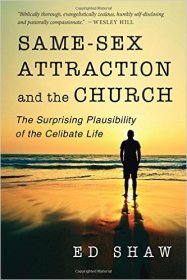 nowadays. It sounds totally implausible to ask people to turn their backs on same sex relationships and live a lonely life as a perpetually single person.  Not only does it sound implausible, it sounds unhealthy. Listen to what Melinda Selmys, a Roman Catholic who experiences same sex attraction says:

“Though shall not,” has consistently failed to persuade the postmodern world because it is madness.

She’s right, it in our world the idea that someone should say yes to the single life is absolute madness. And this is exactly where the problem lies, the church has unintentionally perpetuated the implausibility of a same-sex, single, celibate Christian life through a number of misteps. Ed Shaw, a pastor and the author of Same-Sex Attraction and the Church, seeks to address this plausibility problem by making what the Bible clearly commands seem plausible again.

Shaw’s thesis is that,

The reason that the Bible’s teaching on homosexuality sounds so unreasonable is because of a whole number of misteps that the church ahs taken over the years; a whole host of ways in which evangelicals have become too shaped by the world around us. (22)

What Shaw does throughout the book is highlight 9 misteps that the church has made, unwittingly making the same sex celibate life implausible. He begins the book with a very personal chapter, describing what life has been like pursuing a life of sexual holiness as a pastor who has same sex attractions. This is an important chapter because the plausibility problem is a deeply personal and emotional issue for him, not only as a pastor but as a same-sex attracted Christian. This chapter really sets the context.

So what are the missteps? Here are the 9 incorrect beliefs that the church has adopted, thus perpetuating the implausibility of a single-celibate same-sex life:

Although these 9 topics have certainly influenced how the church processes issues of same sex attraction in the church, they have wide ranging implications. Personally, I have an ax to grind against belief 4 and 9. Even apart from issues of sexuality, the beliefs that “if it makes you happy, it must be right” and “suffering is to be avoided” have done so much to harm the mission of the church. Because the church has imbibed these values (especially the American church) people are slow to sacrifice for the sake of God’s mission. And perhaps even worse, students tend to abandon their faith in college precisely because they have bought into “happiness” as the goal of life, and hence their faith as well. I’ve seen it time and time again, people following Jesus because of the “happiness” and “blessings”

he has to offer them instead of simply following him because he is the Messiah. It’s a consumeristic view of faith. All this to say, the issues Shaw addresses have major implications even beyond the topic of same-sex attraction.

I highly recommend this book to those in ministry. I wish all my pastor friends would take the time to read it simply because I know that some of them unknowingly are perpetuating these harmful beliefs in their churches (2 and 5 seem to be especially common in the circles I find myself in.) This would also be a helpful book for all sorts of leaders in Christian ministry to read. We would really benefit from being more careful about how we address issues of family life and relationships, as elevating certain topics in sermons or bible studies can unwittingly alienate a large segment of our Christian brothers and sisters.

Even though you may not agree with the details of Shaw’s proposal, this is an invaluable resource for those seeking to disciple their flock in the areas of sexuality and beyond.

NOTE: I received this book from IVP in exchange for an impartial review.