Good textbooks are hard to find. When I am looking for a textbook, I am looking for a book that is well balanced. It engages in critical discussion yet it is also thoroughly evangelical. Also I like it when textbooks move beyond mere rehearsal of recycled ideas or summary statements. I want a textbook that will help students think through complex issues. In this case of finding a textbook on Pauline literature I want a textbook that will help us think through Paul and begin to think like Paul. Bruce Longenecker & Todd Still have written book that does those two things. 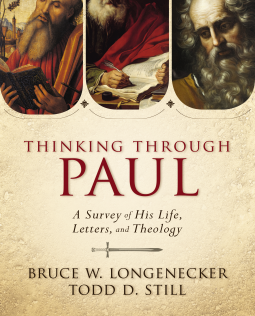 When Longenecker and Still titled their textbook Thinking though Paul, they tried to capture a range of possible meanings within that short phrase. 1- think about Paul, and 2- thinking in a Pauline manner.

Why have we chosen to entitle this book Thinking Through Paul? Because it signals two perspectives that characterize its chapters. First “thinking though Paul” will involve thinking about Paul, sorting through his letters and considering what he was saying in them. From this vantage point, Paul is the object to be studied, to be “thought through,” to be explored. But at times a second sense of the phrase will predominate, in which “thinking through Paul” will involve “thinking in a Pauline manner,” seeing things from his perspective, thinking along his thought patterns. (13)

The textbook covers all of Paul’s letters. Each chapter addresses:

2-Key passages in each letter

3-Flow of thought through the letter

Final section of the textbook moves to the synthesizing task of putting Paul’s theology together. As a teacher/student this was the most interesting aspect of the book. Also it was the most important part of the book for of reviewing its functionality as a textbook, primarily because it let me answer the question, “What are the presuppositions & the big picture narrative the authors are working with?”

Question – what is the center of the Paul’s letters? Justification, reconciliation, Jesus is Lord, being in Christ, Jewish/Gentile relations? The truth is that its really hard to say – it is probably better to talk about Paul’s central narrative. These two narratives have often been spelled out as covenant & apocalyptic. The authors attempt to avoid the approach that divorces the two. Very simply their position is…

The God of Israel has created a good creation that is currently under the influence of cosmic forces that run contrary to the ways of the creator God. These forces include the powers of Sin and Death, who have conscripted the human race (as evidenced in Adam) in their efforts to denude God of his creation. Through the death and resurrection of Jesus Christ, God has acted to redeem his good creation from the clutches of those powers. Being “in Christ” and living within the story of Jesus, Jesus-followers are participants in that process of divine triumph, whose lives are continually to be transformed by the Spirit as miniature advertisements and embodiments of the eschatological rectification of the whole created order, to the glory of God. (302)

Is the incarnation of Christ present in Paul’s theology, what does it mean for Paul to say that Christ is pre-existent? Some argue that Paul doesn’t have an explicitly high Christology (Like John). Longenecker & Still argue “Paul evidences moments of extremely high Christology.” (305) They demonstrate how Paul’s implicit Trinitarian theology draws Christ into Jewish Monotheism. On a related note, the authors also emphasize Paul’s familiarity with the Jesus Tradition, though they acknowledge that Paul’s knowledge would have come second-hand. They show how Paul’s theology is infused with the content of this tradition.

Theology – Faith In or Faith Of?

Longenecker & Still’s work helps us see Paul the missionary/theologian as a letter writer who is skilled in moving from the macro-narrative of the gospel (according to them, the cosmic triumph of God through Jesus Christ) to the micro-narrative of believer’s lives. This is a fantastic textbook – it includes great illustrations, interesting side-bars, fun diagrams, and fantastic discussion questions at the end of each chapter. My only qualm with it is the paper. That might sound like nitpicking, but as I highlighted and took notes on pages I found that everything I was writing tended to smudge, that really stinks for students who like to take notes in their textbooks. Also, the high-gloss paper creates a lot of glare when you read it under bright lights. If you choose to ignore these small deficiencies and you use this book for a class you will definitely have a textbook that helps your students think through Paul in challenging ways.