I haven’t really made it a practice of reading these types of books, much less reviewing them, however my brain has been fried from a lot of intense work these past few months and I really needed a break. I needed to read something that wouldn’t stress me out. So I acquired a copy of Jim Gaffigan’s Dad is Fat. They say laughter is the best medicine, that definitely is not true, laughter won’t cure cancer or a broken leg, or broken ribs (actually laughter is the worst kind of medicine if you have broken ribs), however when it comes to stress 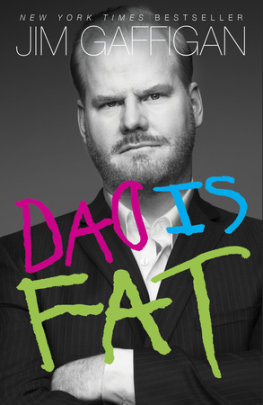 laughter works wonders. This book had me laughing out loud the whole time.

Jim Gaffigan, as you probably already know, is the stand up comedian famous for his “hot pocket” routine. Yes the hot pocket bit does show up in the book, but it doesn’t play a major role in the plot line. Actually, there is no plot line in this book, it’s a collection of “essays” (can I even call them essays, essays sounds so formal and academic), about family life. They are mainly humorous observations of what it looks like to be a father of 5 in New York City. He shares with you, the reader the joys and horrors of raising 5 kids, who never want to sleep, in the city that never sleeps.

Among his “essays” one of my favorites was “Oh My God, You’re Pregnant?” in which he points out the absurdity of how people get surprised when they find out a celebrity is pregnant…

As human beings we end up acting like we are the first generation on this planet to deal with pregnancy. We are most shocked when really attractive, successful someone get pregnant. It’s unbelievable. “Did you hear Beyoncé got pregnant? Its almost as if she is a human being!

Another one of my favorites is his essay, “Toddlerhood.” He makes the keen observation that the more he thinks about it, adults are actually a lot like giant toddlers…

I think we are always unconsciously seeking to return to our early childhood. This is why we go to bars…Think of the last two times you had Jell-O. When you were three and when you were in that bar in Florida for spring break. Have you ever turned off lights in a room filled with children? They immediately start screaming and acting insane. Is it merely coincidence that lights are so low in bars? It’s just a license for adults to misbehave.

All in all this book had me laughing the whole time. And I’m pretty sure that if you pick it up you will be laughing as well.